A commemorative postage stamp on the 3rd Anniversary of the signing of the North Atlantic Alliance : 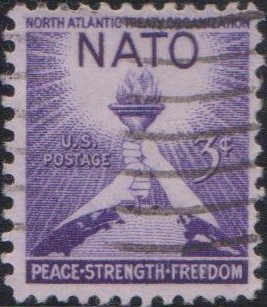 The Historic Stamp :
The 3¢ stamp honors the third anniversary of the founding of the North Atlantic Treaty Organization. NATO was formed to provide a unified military command for the defense of 12 Western nations (the number was later increased to 15), including the United States. Article 5 of the treaty provides that an attack on one member will be considered an attack on all members.

The stamp was designed by C. R. Chickering. It shows two hands holding aloft a burning torch. Beneath the torch are the objectives of the organization, the preservation of peace through strength and freedom.

The NATO Stamp was printed in deep violet by steel engraving. The First Day City was Washington, D.C.