A commemorative postage stamp on the 125th Anniversary of the granting of a Charter to the Baltimore and Ohio Railroad Company by the Maryland Legislature : 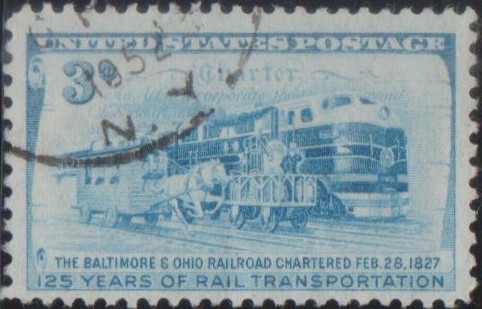 The Historic Stamp :
The 3¢ stamp was issued to commemorate the 125th anniversary of the granting of a charter of operation to the Baltimore and Ohio Railroad. The first passenger railway in the United States, the B & O has been in continuous operation since its first trip through Baltimore on January 7, 1830.

The stamp, designed by C. R. Chickering, portrays three stages of development in rail transportation against a background of the 1827 charter. At the far left is the horsedrawn “Pioneer Car” initially used by the railroad. The “Tom Thumb”, America’s first steam locomotive, operated by the B & O, is in the centre. A modern, streamlined Diesel engine is pictured at the far right.

The Baltimore and Ohio Railroad Charter Stamp, printed in bright blue by steel engraving, was first placed on sale in Baltimore, Maryland.