A commemorative postage stamp on the Australian National Gallery, Canberra, opened in 1982 by Her Majesty The Queen : 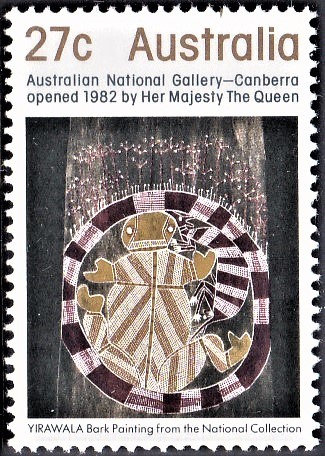 Issued for : The commemorative stamp issued by Australia Post for the opening of the Australian National Gallery reproduces a bark painting by the Aboriginal artist Yirawala, from the Gallery’s collection. The illustration on the first day cover, shown above, is a painting of the exterior of the Gallery by a member of Australia Post’s Graphic Design Section.

Design : The bark painting by Yirawala selected for the stamp commemorating the opening of the Australian National Gallery is one of a series illustrating the legend of Gurgurr, the moon man. Gurgurr and his dog, Mulutji, dug for water while travelling inland during the Dreamtime. The flood of water released by their efforts became the river now known as the Liverpool River. Gurgurr and his dog were trapped in the water, but because they had brought forth a great river their reflections went to the moon, and remain there still.

Yirawala, an elder of the Gunwinggu tribe, was the first traditional bark painter to gain fame in his own lifetime. He was born near the Maningrida settlement in approximately 1896, and started painting on bark when over the age of 50. In the traditional styles of western Arnhem Land, he depicted the Great Spirit ancestors of the Dream time, totemic objects and animals, and the sacred symbols of rituals and ceremonies.

In 1971, Yirawala was appointed an MBE and was awarded the International Art Co-operation prize. In that same year he became the first traditional Aboriginal artist to have an exhibition entirely devoted to his own work. His paintings now hang in art galleries and museums in Europe and North America. His wish that his work become part of a national collection for all Australians to enjoy, has in part come to fruition with the location of a significant collection of his paintings in the Australian National Gallery. Yirawala died in 1976, on Croker Island. A copyright fee has been paid to the Aboriginal Artists’ Agency, Sydney, agents for Yirawala‘s estate.