Complete Set of 4 nos of postage stamps & 1 no. of Souvenir Sheet on the XII Commonwealth Games, Brisbane, Queensland in 1982 : 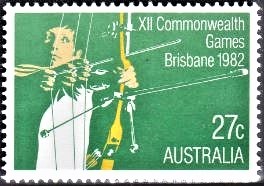 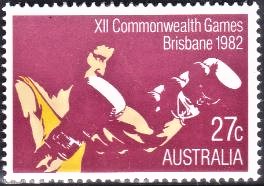 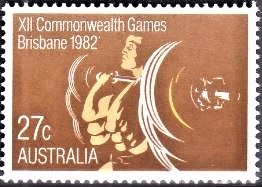 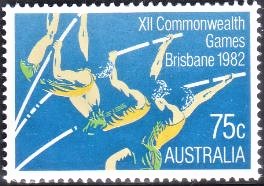 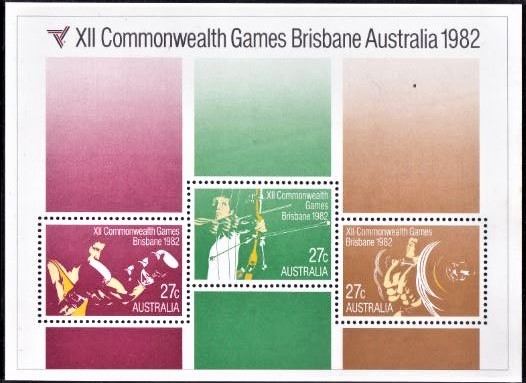 Issued for : Australia hosted the XII Commonwealth Games, held in Brisbane, Queensland, from 30 September to 9 October 1982.

Design : Four stamps were issued, featuring archery, boxing, weightlifting and pole vaulting. A miniature sheet was also issued, which reproduced the three base rate stamps. The 75c stamp was omitted because the existing dies manufactured for Australia Post miniature sheets have provision for three stamps only. Javelin throwing was illustrated on the first day cover of the stamps, reproduced above, and the start of a race on the miniature sheet first day cover.

Designer : Richard Cornielje [Mr Richard Cornielje was born in Alkmaar, north Holland, in 1947. His family migrated to Australia in 1950, and he studied graphic art at East Sydney Technical College. In 1966 he returned to Europe to further his studies in graphic design. After a decade of experience as a graphic designer and art director he returned to Australia to work as a freelance designer for some of Sydney‘s leading design studios and advertising agencies. The design of the commemorative stamps for the XII Commonwealth Games was Richard‘s first commission for Australia Post. During that time, he was employed as a Senior Art Director at George Patterson Ply Limited, Australia‘s largest advertising agency. Much of his spare time is spent with his two sons and daughter, with swimming, soccer and ballet classes.]