A commemorative postage stamp on the Centenary of the Calcutta Port Trust (Port of Kolkata), a riverine port in Kolkata : 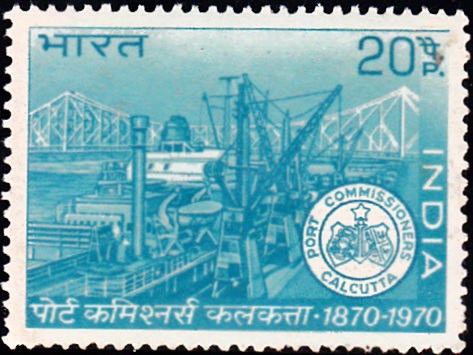 Issued for : The Posts and Telegraphs Department is proud to be associated with such a saga of growth and phenomenal development by issue of a special commemorative stamp on the occasion of the centenary of Calcutta Port Commissioners.

Description of Design : The design of the stamp is horizontal and depicts a picture of a Dredger’ Pilot Vessel and cranes at Calcutta Port with the crest of the Port Commissioners Calcutta. Howrah Bridge over the River Hooghly is shown in the background.