A commemorative postage stamp on the Coastal Embankments of East Pakistan (now Bangladesh) : 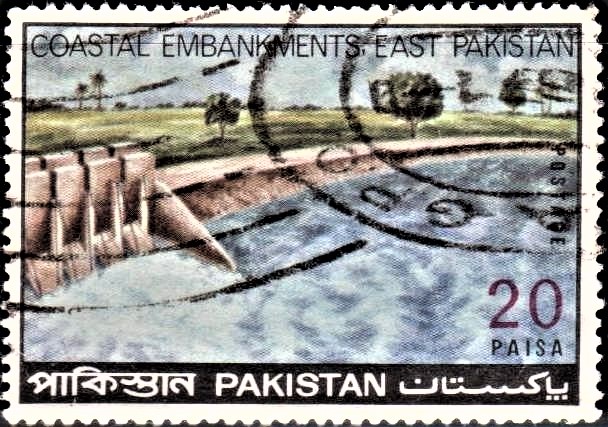 Issued for : Pakistan Post Office is issuing a Commemorative Postage Stamp of 20-Paisa denomination on Feb. 25, 1971 to commemorate the remarkable project relating to Coastal Embankments, undertaken by E. P. WAPDA as a valuable contribution to the economic development of East Pakistan.

Design : The format of the stamp is rectangular and horizontal. The design shows a Coastal Embankment preventing sea-water from entering into cultivated area. A portion of the sluice gates, for draining flood waters, is visible on the left side of the stamp. In the background is cultivated land with paddy fields. The caption “COASTAL EMBANKMENTS, EAST PAKISTAN“, the words “Postage” on the right side of the stamp and “Paisa” below the value, are in black colour. The value is in red colour. The black strip at the bottom of the stamp bears the words “Pakistan” in Bengali, English and Urdu in reverse.