A commemorative postage stamp on the 50th Anniversary of the Hashemites (House of Hashim), royal family of Jordan : 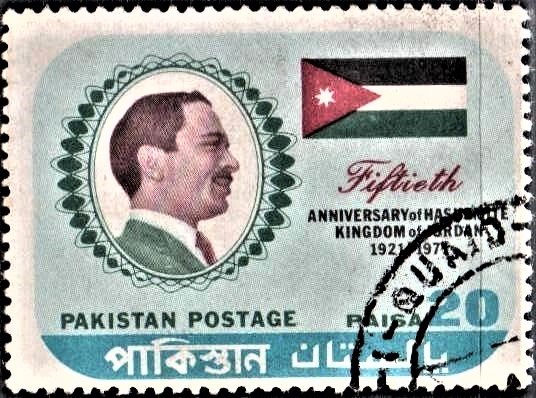 Issued for : To commemorate the Fiftieth Anniversary of the Hashemite Kingdom of Jordan (1921-1971), Pakistan Post Office is issuing a postage stamp of 20-Paisa denomination on 25th December 1971.

Design : The format of the stamp is horizontal. The portrait of King Hussein of Jordan is framed in a green decorative pattern on the left side of the stamp. The flag of Jordan is on the top right hand side against a light turquoise blue background. Below the flag are placed the words ‘Fiftieth Anniversary of Hashemite Kingdom of Jordan – 1921-1971′. The word ‘Fiftieth’ is in red and white and the rest of the lettering is in black. The words ‘Pakistan‘ ‘Postage’ and ‘Paisa’ are in green. The value ’20’ on the right bottom corner is in turquoise. A turquoise strip runs at the bottom of the stamp with the words ‘Pakistan‘ in Bengali and Urdu in white.