A commemorative postage stamp on the Fight against Racial Discrimination : 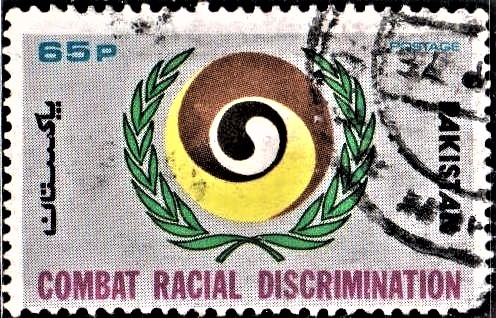 Issued for : To commemorate the ‘Decade for Action to Combat Racism and Racial Discrimination’ the Pakistan Post office is issuing a postage stamp on 65 Paisa denomination on 15th September, 1976.

Description : The stamp is horizontal in format. The racial discrimination emblem of U.N. which comprises the green wreath and the globe consisting of white, black, yellow and brown nucleus, representing the four human races of the world appears in the centre of the stamp against a light grey background. The slogan “COMBAT RACIAL DISCRIMINATION” appears at the bottom of the stamp in bold lettering in magenta colour. Denomination figure ’65’ is placed on the top left corner while the word ‘postage’ in small lettering on the top right corner both in cyan colour. The word ‘Pakistan‘ in English and Urdu appear in black on the right and left sides of the stamp respectively.