A commemorative postage stamp on the Birth Centenary of Allama Sir Muhammad Iqbal : 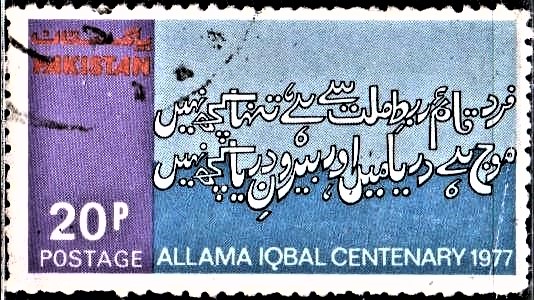 Description : Stamp is horizontal and rectangular in format. One of the famous verses of Allama Iqbal

appears in stylized calligraphy in the blue colour rectangle at right. The first line of the verse appears in white against a light blue colour background representing the sky while the second line appears to float on a wave of river represented by the dark blue portion. The wording “Allama Iqbal Centenary 1977” appears in reverse form at the bottom of the stamp.

“Pakistan” in Urdu and English together appears in orange colour at the top of the violet panel at left. The denomination figure “20” with the word “Postage” underneath appears in reverse form at the bottom of the panel.