A commemorative postage stamp on the Festival of India in France & U.S.A. (1st issue) : 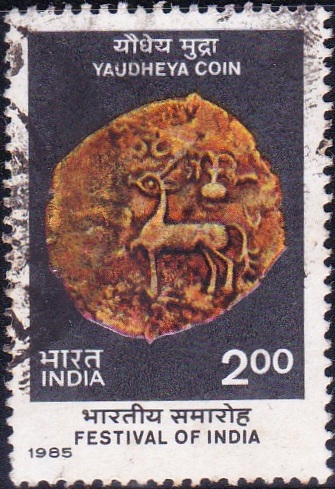 Issued for : The Department of Posts, India is proud to commemorate the Festival of India in U.S.A. and France by issuing two postage stamps. The present stamp depicts a copper coin of the Yaudheya circa 200 BC symbolising Ahimsa “Not to injure any living being”.

Description of Designs : The 200p stamp portraying the Yaudheya copper coin has been designed by India Security Press, Nasik. The First Day Cover and cancellation have been designed by Nenu Bagga.