A commemorative postage stamp on the 125th Anniversary of the Lucknow State Museum, Uttar Pradesh : 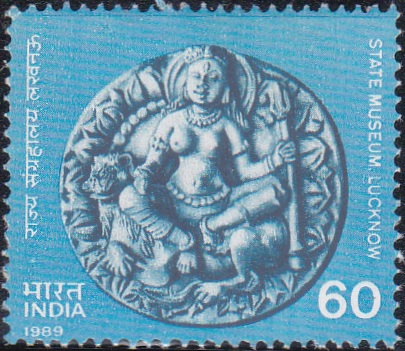 Issued for : The Department of Posts issues this stamp on the occasion of the 125th anniversary of the establishment of the State Museum, Lucknow.

Description of Design : The stamp depicts a round terracotta plaque showing goddess Durga seated on a lion. The plaque has a diameter of 36 cms and is dated 5th Century AD, from Sravasti (Bahraich), U.P. This is one of the many beautiful items displayed at State Museum, Lucknow.