Complete set of 2 nos. of commemorative postage stamp on the Freedom from Hunger Campaign: 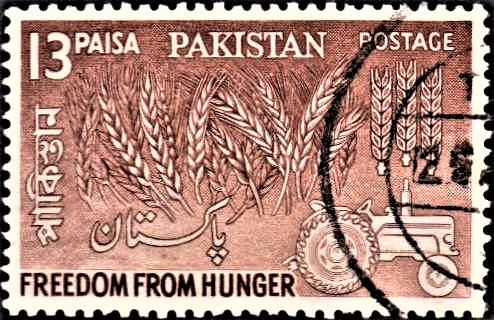 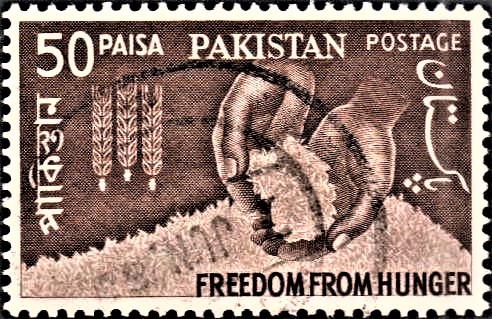 Issued for : The Pakistan Post Office is issuing this set of stamps for bringing out an immediate comprehension of the problem of world hunger and for making an important psychological contribution in the attack thereon.

Design : The designs have been prepared by the Pakistan Security Printing Corporation Ltd., Karachi under the guidance of the Director-General, Pakistan Post Office.

13-PAISA: Crop of wheat is shown with a tractor in the right hand bottom corner symbolising mechanised farming for greater crop yield. At the bottom on the left side appears the slogan “FREEDOM FROM HUNGER”. Above the tractor is the symbol of F.A.O., at the top are the words “13-Paisa”, “PAKISTAN” and “Postage” in English. PAKISTAN in Bengali appears in the left side and in Urdu at the bottom.

50-PAISA: Human hands have been shown lifting rice from a heap and the slogan “FREEDOM FROM HUNGER” appears at the bottom right. The symbol of F.A.O. appears to the left of the centre of the stamp. At the top are the words “50-Paisa”, “PAKISTAN” and “Postage” in English. “PAKISTAN” in Urdu appears on the right side and in Bengali on the left side.