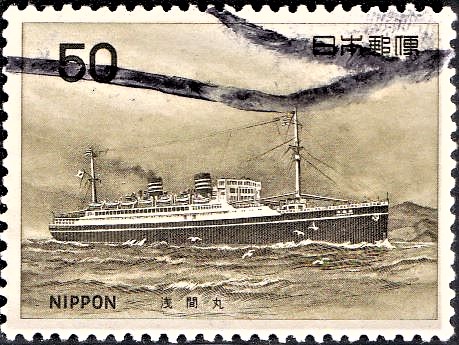 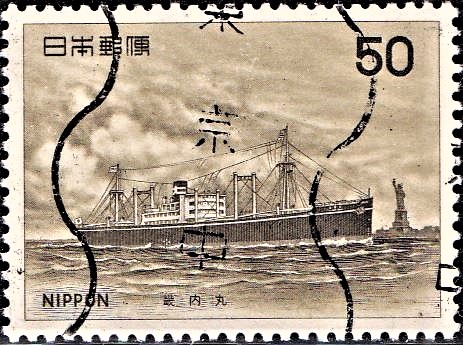 Issued for : As the fifth of the Ship Series, two 50 yen postage stamps (se-tenant) will be issued each showing “Asama-maru” and “Kinai-maru”.

Picture : Asama-maru was one of three ships the Nippon Yusen Shipping Company built to be put on the North America run after the First World War and launched in October 1925. It was not only the largest passenger ship in Japan but the first large sized dieselized passenger ship on the Pacific line. Its equipment being of the highest level it was applauded as “The Queen of the Pacific”. In October 1944 it was torpedoed in the Bashee Channel while sailing. It was 16,955 tons able to carry 839 passengers.

Kinai-maru was the speed freighter put on the New York direct run in June 1930. Its highest speed being over 18 knots, the high speed rarely experienced in the world, it made a voyage to New York in 25 days 17 hours and 30 minutes, 9 days earlier than the time it had taken to get there before. The transportation route of the raw silk was switched from the trans America railway to the excellent high speed freighters including the Kinai-maru all owned by the Osaka Shosen Shipping Company. The raw silk from Japan had been transshipped at the ports on the western coast of America to be expressed by the railway to the eastern cities. The Kinai-maru was the epoch-making freight ship in Japan as well as the pioneer of the speed freighters on the Pacific line. The gross tonnage was 8,365 tons.