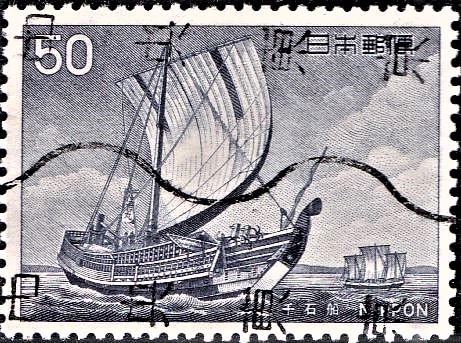 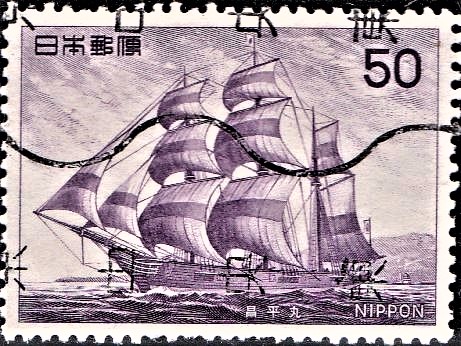 Issued for : As the third of the Ship Series, two kinds of 50 yen postage stamps (se-tenant) will be issued depicting respectively “Sengoku-bune” and “Shohei-maru”.

Picture : Sengoku–bune, formally called “Bezai–sen“, was the large freighter of Japanese style that played the leading part in the marine transportation in the Edo Period (1615-1869). Having been constructed as coastwise ship when Japan was nationally isolated from the foreign countries, it was vulnerable in the rough weather and experienced not a few disaster at sea. But yet the high growth of industrial economy in the Edo Period depended much on the activities of Sengoku–bune.

Shohei–maru was the battleship of the western style with three masts, measuring 31 metres long, 7.3 metres broad and 4.5 metres deep.

Nariakira Shimazu (1809-1858), feudal lord of the Satsuma clan, had it laid down from the necessity of the coastal defence in the last days of the Tokugawa shogunate. The engineers of the Satsuma clan planned and constructed it consulting the western books. The ship was completed in December 1854 and afterwards dedicated to the Tokugawa shogunate.