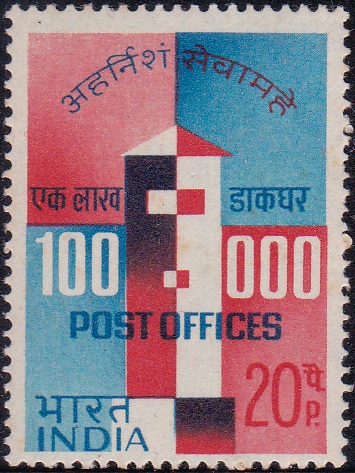 Issued for : There is nothing lowly about one hundred thousand even as a number. When an organisation becomes so large as to have one lakh of branches, it is surely a matter for special gratification. The hundred thousandth post office is being opened today at Brahmpur Chaurasta in Bihar. The Indian Post Office has reached a unique milestone and to commemorate the occasion, a special postage stamp was being issued

The stamp design is adapted from the design prepared by Shri C.R. Pakrashi, Artist, New Delhi.

The design of First-Day Cover for this issue is based on the design sent by Prof. V.K. Sawai, Professor, Sir J.J. Institute of Applied Art, Bombay.