A set of two commemorative postage stamps on the Poet and Musician, Kazi Nazrul Islam : 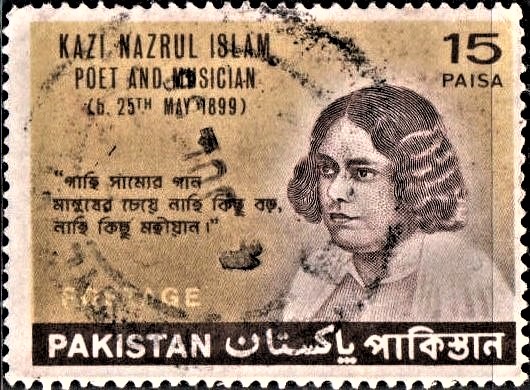 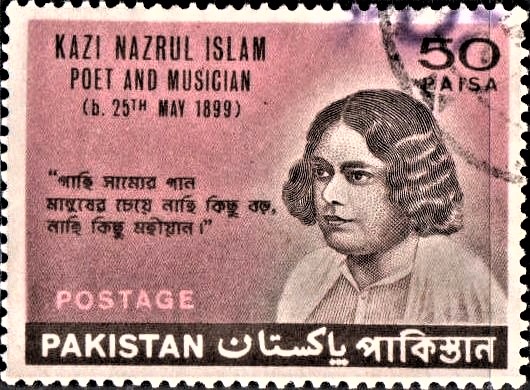 Issued for : To highlight the role played by the Rebel Poet and Composer, Kazi Nazrul Islam (b. 1899), as a fighter for freedom of the Indo-Pakistan Subcontinent, Pakistan Post Office is issuing a set of two stamps of 15 Paisa and 50 Paisa denominations in the “Poet Series” on the 25th of June, 1968.

Design : The portrait of Kazi Nazrul Islam appears at the right hand side against a lemon yellow background on 15 Paisa stamp and a strawberry red background on 50 Paisa stamp. The portrait is hand engraved and printed in brown colour. The word “Pakistan” in English, Urdu and Bengali appears in reverse in the brown panel at the bottom. The words “Kazi Nazrul Islam Poet and Musician (b. 25th May 1899)” are printed in brown at the top. The denominations “15 Paisa” and “50 Paisa” are also printed in brown in the top right hand corner. The word “POSTAGE” appears at the left hand side just above the bottom panel. On the left hand side of the portrait the following verse from his works is printed in Bengali Script in brown.

“I sing the song of Equality
Nothing is Bigger and Nobler than Humanity”.

Born on May 24, 1899 at Churulia, Bardhaman, Bengal Presidency, British Raj

One thought on “Pakistan on Kazi Nazrul Islam”