A commemorative postage stamp on the Indian Green Revolution 1968 : 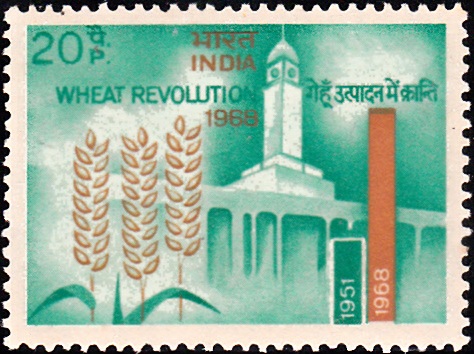 Issued for : The Posts and Telegraphs Department is happy to bring out a special postage stamp to commemorate the “Wheat Revolution” and its significance to our agricultural revolution and economic well-being.

Description of Design : The design of the stamp is horizontal and depicts stalks of wheat, the Indian Agricultural Research Institute, New Delhi in the background and the histogram showing the growth in the production of wheat in respect of the years 1951 and 1968.

Printers : India Security Press. The stamp design is adapted from the design prepared by the artist of I.C.A.R., New Delhi.