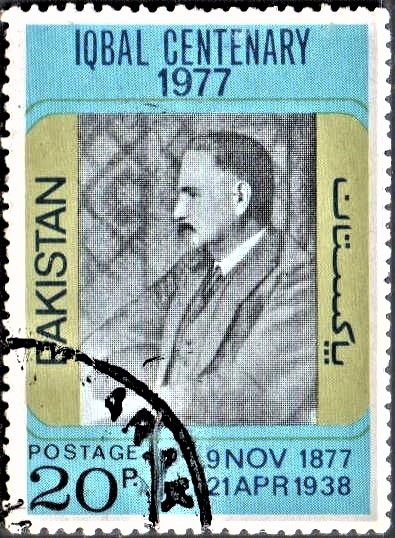 Design : The format of the stamp is vertical. The main feature of the stamp is the portrait of Dr. Muhammad Iqbal, the great poet and Philosopher, which is printed in Black and Blue colours. In the upper Ultramarine Blue panel the caption “Iqbal Centenary 1977″ is printed in Turquoise Blue and in the lower panel the date of birth “9 November, 1877” and the date of death “21 Apr 1938” is printed on the bottom right side. The word “Postage” and denomination figure ’20-Paisa’ are printed in Black on the bottom left corner in the lower panel. The word “Pakistan” in Urdu and English are printed in Turquoise blue in the vertical panels of Olive Green colour on both sides of the portrait.