A commemorative postage stamp on the Valour of Indian Armed Forces in 1965 War : Jai Jawan, a slogan given by former Indian prime minister, Lal Bahadur Shastri : 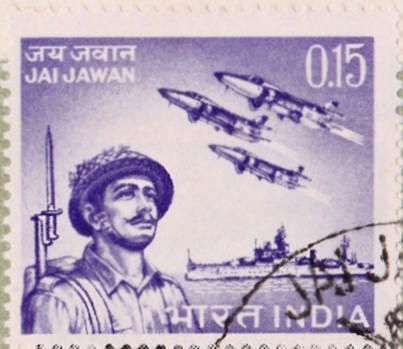 Issued for : Republic Day 1966 will be a special and poignant occasion. When the troops salute the President they will march as veterans of a victorious army and when the retreat sounds it will be a requiem for those who fell on the frontier defending their motherland. On this day the whole nation pays homage to these brave men and their brave deeds. The Posts and Telegraphs Department joins in this homage by issuing a special commemorative postage stamp as an humble tribute to the Armed Forces.

Design : The design of the stamp is based on the rough visual prepared by Shri V. K. Sawai an artist of Bombay.