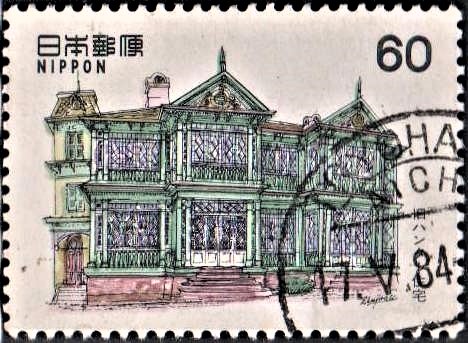 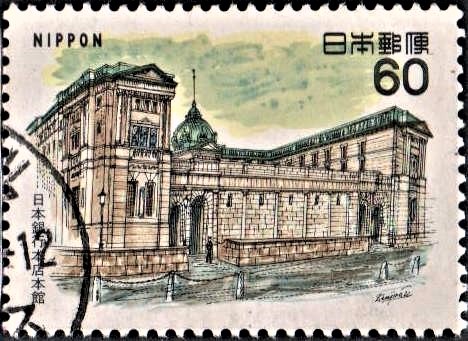 Issued for : As the 10th in the Modern Western-style Architecture in Japan Series, two 60 yen postage stamps will be issued on February 16, 1984.

The main building of the BANK of Japan is one of the finest examples of Meiji Period western-style architecture. It was designed by Dr. Kingo Tatsuno of Tokyo Imperial University and was constructed over the period from 1890~1896.

This building, which adopts neo-Baroque style with Renaissance detail predominantly, has dignity suitable for the atmosphere of the Meiji era which was a Renaissance in Japan.

This building has withstood 80 years and the beauty of its sculptured walls and blue-green dome makes it stand distinct amongst the surrounding recent modern architecture.

It is said that this building was built in 1889 by an English craftsman commissioned by A. Gleppe, a German. The house was later purchased by E.H. Hunter, an Englishman and was removed to its present site in 1963 after various renovations.

The is the largest colonial house in Japan. The foundation is of stone and the walls of combed mortar. A colonnade verandah encloses the southern and eastern sides. The projecting parts of this verandah are capped by triangular pediments featuring ridge ornaments and arabesque design.