A commemorative postage stamp on the Silver Jubilee of the Quit India Movement of 1942 : 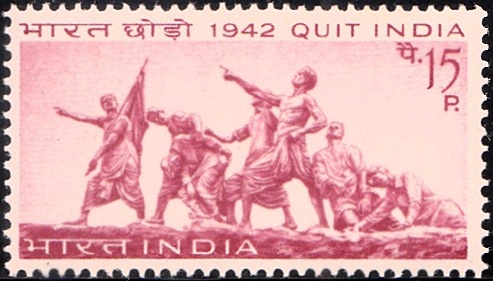 Issued for : On the 9th August this year was celebrated the 25th anniversary  of the historic “Quit India” movement. The Posts & Telegraphs Department pays homage to all the heroes and martyrs who laid down their lives in the struggle, by bringing out a special postage stamp on the 1st October, 1967.

Design : The stamp depicts the Martyrs’ Memorial situated outside the Secretariat Building, Patna of seven students who lost their lives in the Quit India movement while attempting to hoist the National flag. The Memorial was sculptured by Shri Devi Prasad Roy Chowdhury.