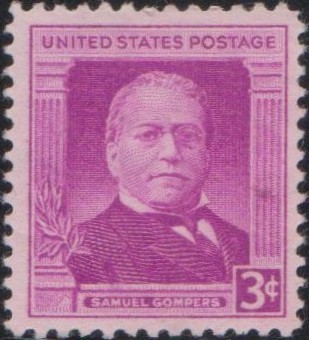 The Historic Stamp :
The 3¢ stamp was issued on the centennial of Samuel Gomper’s birth. It honors the famed labor leader who devoted nearly 60 years to the union movement in America. During that time, he tirelessly promoted workers’ interests and helped them become a powerful force in the nation’s economy. He was one of the principal architects of the American Federation of Labor (AFL) and served as its president for 37 years.

V. S. McCloskey, Jr. designed the stamp, part of the Famous Americans Series. It features a portrait of Gompers in a Colonial style frame, with laurel leaves over the lower left portion.

The Samuel Gompers Stamp was printed in red violet by steel engraving. It was first placed on sale in Washington, D.C.