A commemorative postage stamp on the Centenary of the Organization of Washington Territory : 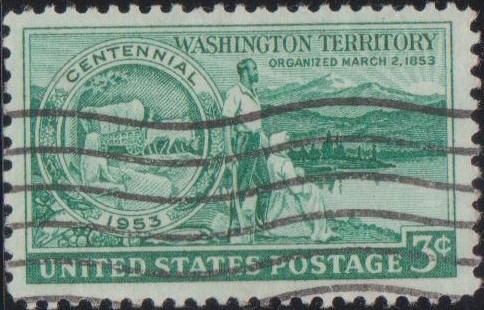 The Historic Stamp :
The 3¢ stamp marks the 100th anniversary of the creation of the Washington Territory. Under the bill signed by President Millard Fillmore, the new territory included all of present-day Washington, northern Idaho, and western Montana.

The stamp design focuses on the settlement of the region. The central scene shows a pioneer family gazing in wonder and amazement at a great expanse of water, with towering mountains dominating the horizon. A second scene is enclosed in a circular frame on the left. It depicts the eastern part of the state, which many early settlers crossed in covered wagons.

The Washington Territory Stamp was printed in green by steel engraving. It was first placed on sale in Olympia, Washington’s capital since territorial days.