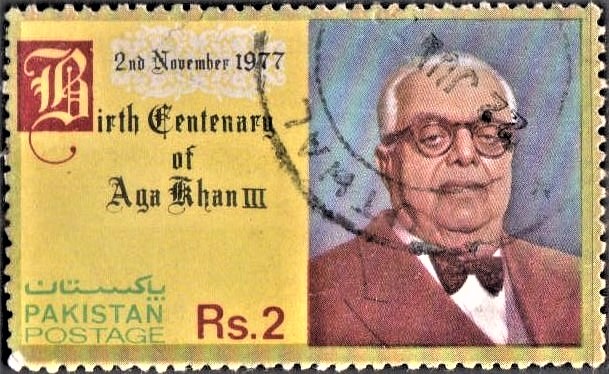 Issued for : In recognition of the extremely valuable services of this great statesman and Philanthropist to the Muslims of the Indian sub-continent, Pakistan Post Office is issuing a Commemorative Postage Stamp of Rs. 2/- to mark his birth centenary on 2nd November, 1977.

Description : The stamp is horizontal in format and is divided into two portions. The right hand side contains the portrait of Aga Khan III, printed in multi-colour against a bluish background and the left side contains the inscriptions “Birth Centenary of Aga Khan III” and “2nd November, 1977″ with yellow background. A white floral pattern appears below the words “2nd November, 1977″. Pakistan in Urdu and English and the word “Postage” are printed in green whereas the Denomination “Rs. 2/-” appears in red. A yellowish gold border is printed around the stamps.