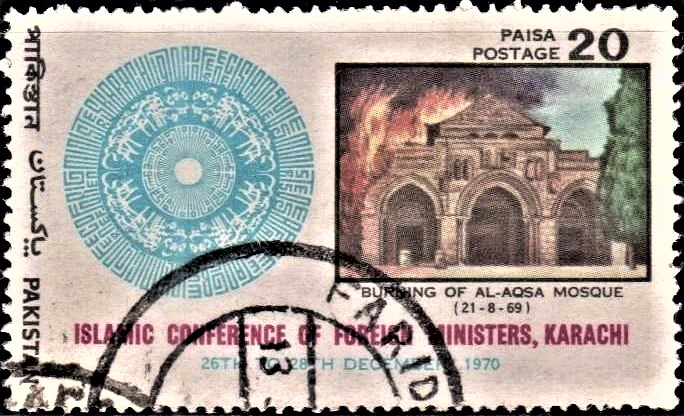 Issued for : On the occasion of Islamic Conference of Foreign Ministers going to be held in the Metropolis of Karachi from 26th to 28th December, 1970, the Pakistan Post Office will issue on 26-12-1970, a commemorative postage stamp of 20 Paisa denomination.

Design : The format of the stamp is horizontal. The right side of the stamp shows Al-Aqsa Mosque in burning condition. Adjacent to the illustration is the crest of the Islamic Conference of Foreign Ministers in blue colour. The caption “Islamic Conference of Foreign Ministers, Karachi” in red colour lines below the crest and the illustration. The dates “26th to 28th December, 1970” are in blue. The words “Pakistan” in Bengali, Urdu and English on the left side are in black colour. The value “20 Paisa”, the word “Postage” above the illustration on the top right side and the words “Burning of Al-Aqsa Mosque (21.8.69)” are all in black colour.