A commemorative postage stamp on the Official National Day of Australia : 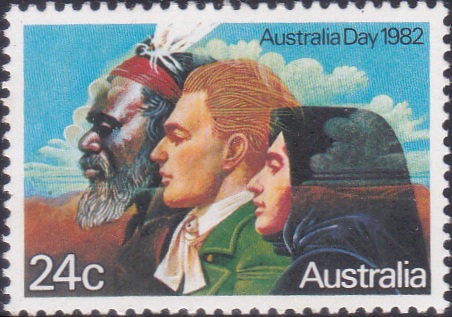 Issued for : Australia Day is celebrated each year on 26 January, the day on which the British flag was raised at Sydney Cove in 1788.

Design : The image on the Australia Day 1982 stamp symbolises three waves of migration : first by Aborigines entering from the islands of south-east Asia; many thousands of years later by colonists from Great Britain; and in post-war years by immigrants from Europe and other parts of the world. The stamp is intended to convey a sense of the unity of the Australian people, while recognising the diversity of their origins. This theme of the three great migration waves forming a complex, multicultural society was suggested for the Australia Day stamp by the National Australia Day Committee.

Designer : Brian Clinton [Mr Brian Clinton was born in Perth, Western Australia in 1942 and studied art at the Perth Technical College. He worked as an illustrator on a Perth Sunday newspaper, before moving to Melbourne where he joined Mr Ron fletcher (another artist who has designed stamps) in an art and design studio. Mr Clinton has received a number of portrait commissions, and his subjects include Victorian politicians. His stamp commissions for Australia Post Include ”famous Australian Racehorses”, ”fishing in Australia” and the “Marriage of HRH Charles, Prince of Wales & the Lady Diana Spencer“. Mr Clinton is a member of the Society of Illustrators, New York, and has exhibited with the Society. He is also interested in sculpture. In his leisure time he enjoys playing cricket and skiing. He lives in Melbourne with his wife and two children.]