Complete Set of 2 nos of commemorative postage stamps on the 2500th Buddha Jayanti : 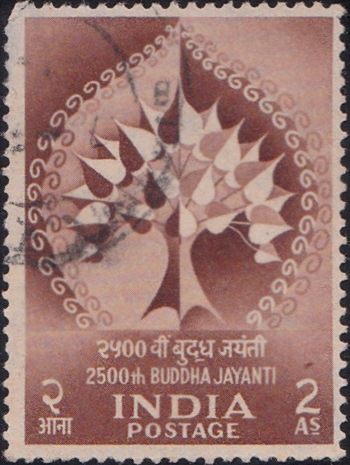 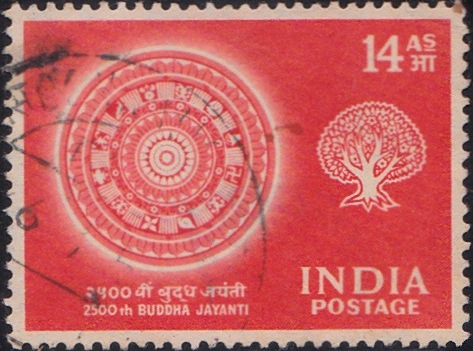 Design :
2 anna – Artist’s representation of the asvattha tree (ficus religiosa) at Bodh Gaya, seated under which Gautama attained enlightenment. In Buddhist art, this tree symbolizes the supreme moment in Gautama’s life when he became the Buddha.

14 anna – The round figure on the left is a replica of the umbrella which once surmounted a colossal Bodhisattva statue at Sarnath, carved in the reign of the Kushan king Kanishka (first-second century A.D.). The umbrella is 10 ft. in diameter and is adorned with concentric decorative bands. The pierced projecting portion at the centre has the shape of a lotus. The ring beyond the lotus-petals contains a row of twelve mythical animals. The next band has eleven symbols besides one broken, viz., the three jewels, a pair of fish, a fleur-de-lis, a vase with foliage, a conch, a swastika, a vase with fruits (or sweets), a cup of leaves and three honeysuckles. The outermost band is made of lotus-petals bordering the umbrella. On the right is shown a representation of the Bodhi tree.