A commemorative postage stamp on the 50th Anniversary of the Indian Red Cross Society (IRCS), a voluntary humanitarian organization to protect human life and health based in India : 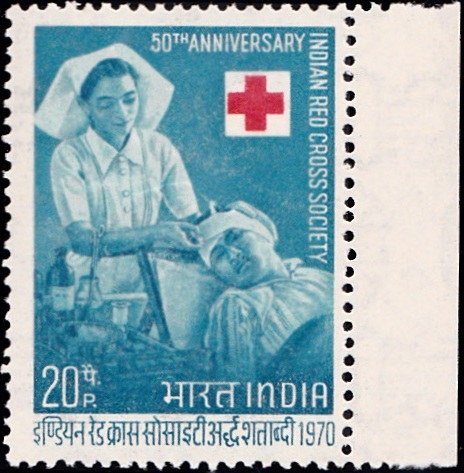 Issued for : Red Cross principles are akin to those of Mahatma Gandhi and it was a happy coincidence that the Golden Jubilee of the Red Cross is being celebrated the year following the Gandhi Centenary Year. The Posts and Telegraphs Department is happy to associate itself with these celebrations in bringing out a special commemorative stamp on the occasion of the Golden Jubilee of this humanitarian organisation.

Description of Design : The design of the stamp is vertical showing a nurse dressing the head of a patient lying on bed. The Red Cross symbol is also shown at the top right hand corner.