Complete set of 4 nos. of commemorative postage stamp on the Decade of Development 1958–1968 : 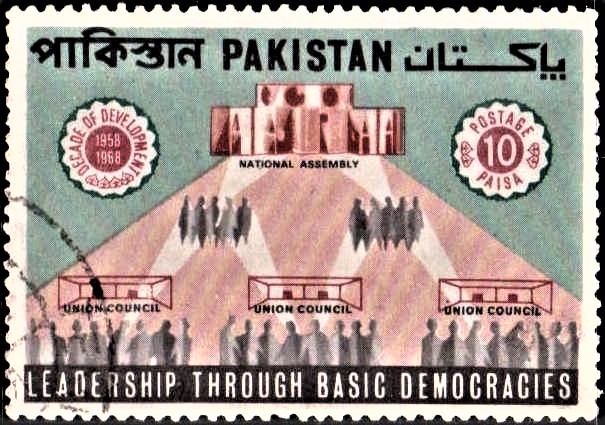 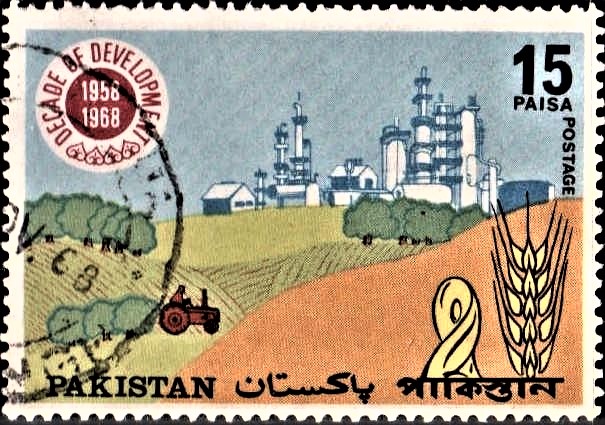 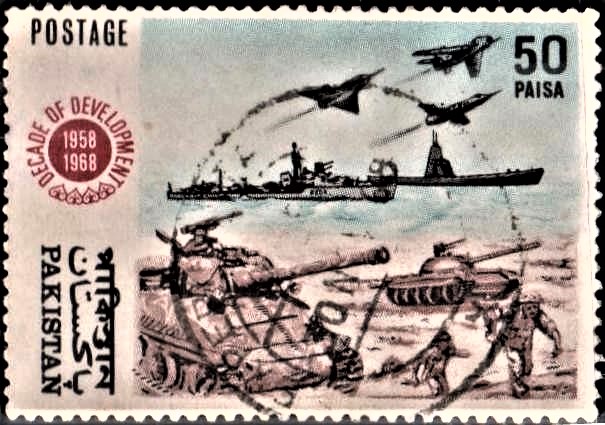 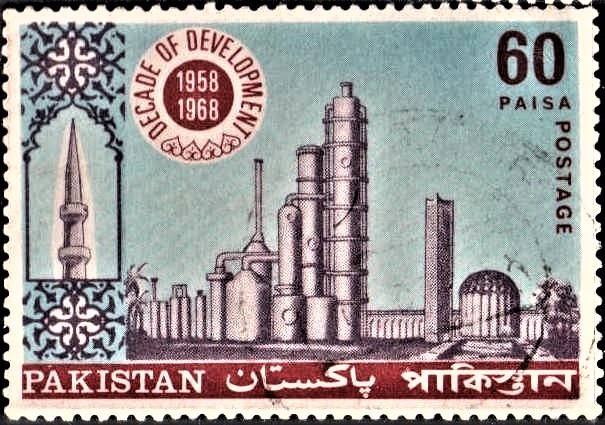 Issued for : To celebrate the Decade of Development, the Pakistan Post Office is issuing a set of four stamps of 10, 15, 50 and 60 paisa denominations on the 27th October, 1968, on the following four aspects of development :–
(i) Political Reforms; (ii) Defence; (iii) Agriculture and Industry; (iv) Science and Culture.

Design :
10 Paisa (Political Reforms) The caption “Leadership through Basic Democracies” appear in the bottom black panel in reverse. Three groups of people are shown in front of Union Council Buildings indicated in simple red outline with ‘Union Council’ written in black underneath of each. Beyond this there are two smaller groups of people and further up there appears the proposed National Assembly Building in brick red colour. This whole thing forms a vista with the people in the forefront and the National Assembly Building at the other end. Rays of light representing delegation of powers are shown as emanating from the people and focussing on the National Assembly. The blank upper portion of the stamp on either side of the National Assembly Building is tinted in green with an ornamented circle on each side. The emblem of Decade of Development appears in the left circle and the denomination figure 10 with ‘paisa’ and ‘postage’ appears on the right in red colour. The word ‘Pakistan’ in Bengali, English and Urdu appears at top in black.

15 Paisa (Industrial and Agricultural Development) Industry is represented by a factory in the upper portion at the right hand side in ultramarine against the lighter background of the same colour. The lower portion depicts Agriculture. The left portion is in lush green and the lower right portion in chrome yellow colour. The green portion is subdivided in three tones of green – the top one is pale green with dark green trees at both ends, the middle portion represents cultivated land with red tractor and dark green trees at the bottom, the last portion is medium green representing a pasture. A corn of wheat and bundle of raw jute are shown in lemon yellow with black outline. Pakistan in English, Urdu and Bengali appears in black at the bottom. The denomination figure 15 appears in black with words ‘Paisa’ and ‘Postage’ beneath it. The symbol of Decade of Development appears in red in the white circle at top left corner.

50 Paisa (Defence) Defence being the subject it is represented by our three forces Army, Navy and Air Force. The space of the stamp is so divided that the subject of the stamp appears on 4/5th of the total space and the lettering and emblem of Decade of Development in the remaining 1/5th portion. In the upper blue portion at right three fighter planes (Mirage, F-104 and MIG-19) are shown. Sailing below is a modern destroyer and a submarine. In the foreground below appears in brown colour a Tank at the left corner. A Chinese tank is shown in the background. Two soldiers are shown climbing a bank. The denomination figure 50 appears at top right corner with ‘Paisa’ underneath the black colour. In the white panel which is 1/5th of the total space appears the word ‘Postage’ at top in black. The word Pakistan in Urdu Bengali and English also appears at the bottom in black but in a vertical position. The emblem of Decade of Development appears in red in between the above letterings.

60 Paisa (Scientific and Cultural Advancement) Science is represented by a factory and Atomic Reactor Building on the right hand side of stamp. Culture is represented by a Minaret Symbolic of modern Islamic architecture, contained within the arched window of the decorative panel at the left, which is after the style and colour scheme of Hala tiles. The panel, Minaret, factory and the Atomic Reactor building all appear in Mauve colour against Cobalt blue background. The symbol of Decade of Development appears in red colour in the white circle at the top on the right side of the decorative panel. The denomination figure 60 appears in the top right hand corner with words ‘Paisa’ and ‘Postage’ beneath it. The word ‘Pakistan’ in English, Urdu and Bengali appears in reverse in the red panel at the bottom.

Quantities Printed : 10,00,000 pieces of each denomination