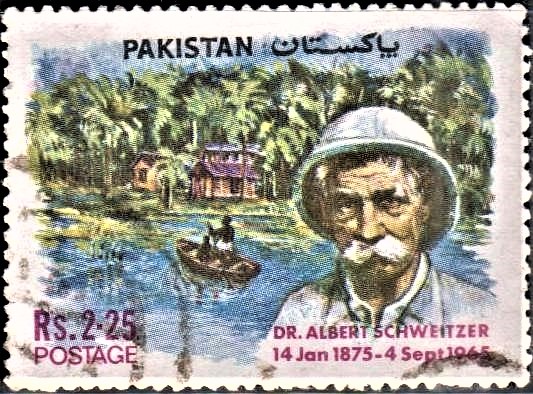 Design : Stamp is horizontal in format. Portrait of Dr. Albert Schweitzer appears at the right side of the stamp. In the background a dense forest of Africa is shown with a small hut near the centre and in the foreground a river is shown with a boat being rowed by an African reminiscent of the Journey he took on the river Ogowe to visit an ailing patient in September, 1915. “Pakistan” in English and Urdu appears at the top near the centre in black while the denomination “Rs. 2.25” with the word ‘postage’ underneath appears in the bottom left corner in red. The wordings “Dr. Albert Schweitzer” 14 Jan 1875 – 4 Sept 1965, appear in red colour across the lower portion of the portrait.