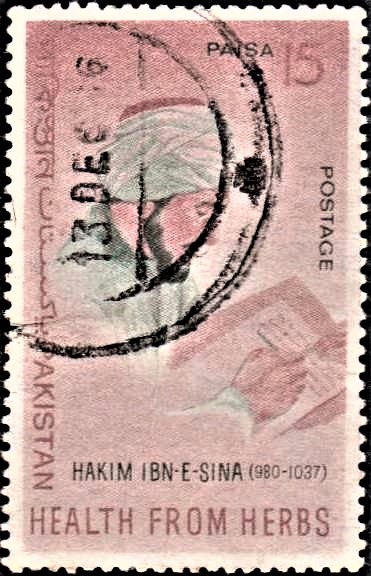 Issued for : To commemorate the establishment of the Institute of Health and Tibbi Research and the laying of its foundation stone by the President of Pakistan, Field Marshal Mohammad Ayub Khan, N.Pk., H.J., on December 3, 1966, a stamp bearing the portrait of Hakim Ibn-e-Sina, who was the founder of the Greco-Arab School of Medicine (Tibb-e-Unani) is being issued by the Pakistan Post Office.

Design : The portrait shows the celebrated herbal physician of East, Hakim Ibn-e-Sina, engrossed in preparing notes for his famous book Canon of Medicine. The word “Pakistan” appears at the left side of the stamp in Bengali, Urdu and English. The word “Postage” appears at the right side of the stamp in English. The value, Paisa 15 appears at the top right. The name of the commemorated Physician Hakim Ibn-e-Sina together with the dates of his life span (980-1037) is shown beneath the portrait. The words “Health from Herbs” appear centrally at the foot of the stamp.