A commemorative postage stamp on the 85th Birth Anniversary of ‘Nightingale of India‘ Sarojini Naidu, an Indian Bengali freedom fighter, president of Indian National Congress in 1925 : 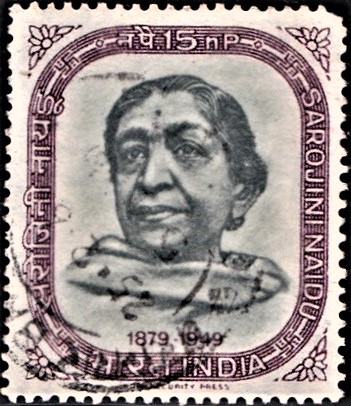 Issued for : The P & T Department deems it a privilege to issue a special commemorative stamp as its humble share of the nation’s tribute on her eighty-fifth birthday.

“The battle of freedom is over. The struggle for peace begins. And my country, my India, that has never excluded friend or foe from her hospitality, my India that has offered knowledge and wisdom to the world, once more will she stand in the forefront of the world civilization, once more she will bring the message of peace, once more will she carry her lamp into the darkness of strife and struggle and hatred; and the nations of the world who are free and the nations of the world who are not free, we pledge you our comradeship, our understanding, our love. Let us move together towards the great world fellowship, which we dream. Let us work together for the peace that will never be ended. Let us work for justice, for equality, for human rights, but not privileges, for human duties but not prerogatives, let us all be fellow citizens of a great, free world of which our ancestors dreamed and for which we have striven.“ (From a broadcast by Sarojini Naidu on August 15, 1947).

“I am happy to know that the Posts and Telegraphs Department is issuing a special postage stamp in commemoration of the forthcoming birthday of Shreemati Sarojini Naidu. In the history of the country’s struggle for freedom her name will always occupy an honoured place. Born in a rich and aristocratic family and blessed with the best that Western education could confer, she threw herself into the Congress movement regardless of the hardships and sufferings which could daunt even the hardiest of men. She utilized all her poetic and literary talents in promoting the country’s cause both at home and abroad, and while enduring the hardships and privations which fell to the lot of fighters for freedom, she retained her characteristically fresh and vivid approach to life. This helped to bring cheer to the lives of many others who are not so fortunately endowed. In honouring the memory of this great woman – one of the greatest that our country has produced, let us remind ourselves of the values which she prized – love of peace, freedom and justice and complete faith in racial and communal harmony and human brotherhood.“ – Zakir Husain