A commemorative postage stamp on the 150th anniversary of the Srirampur College, second oldest college in India, established in 1818 by Serampore Trio (William Carey, Joshua Marshman and William Ward) : 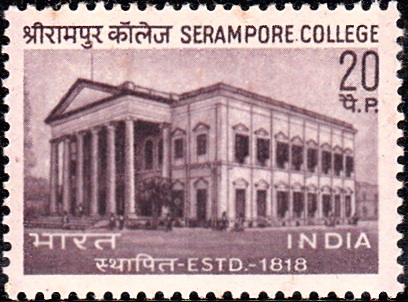 Issued for : Serampore College celebrated the centenary of its founding in 1818 and the centenary of receiving the Charter in 1827. It was affiliated to the University of Calcutta from its very inception. It awaits the recognition of the University Grants Commission as a degree-giving university of full status. After 150 years of fruitful service in the field of higher education, the College celebrated this year its ‘Terjubilee’, i.e., the 150th Anniversary of its founding. In commemoration of this great occasion, the Posts and Telegraphs Department is happy to bring out a special postage stamp in the name of the College.

Description of Design : The design of the stamp is horizontal and depicts the building of the “Serampore College” showing front and left side view.

One thought on “Serampore College”