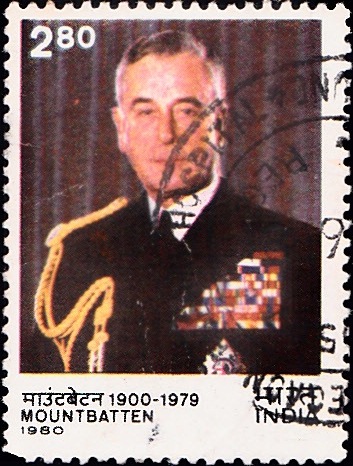 Issued for : Indian P & T Department is privileged to issue a commemorative stamp in his honour.

Description of Designs : The design of the stamp is based on photograph by courtesy of the British Information Services. It shows Earl Mountbatten in the uniform of Admiral of the Fleet, with the Star of the Order of the Knights of the Garter and ribbons of various medals and orders. The aiguillette on his right soldier denotes that he was Personal Aide-de-Camp to the Sovereign.

The first day cover design showing Nehru and Mountbatten is based on photograph by courtesy of the Jawaharlal Nehru Memorial Fund. The cancellation depicts a view of the dome of the Rashtrapati Bhavan, New Delhi.