A commemorative postage stamp on the 50th Anniversary of First Aeroplane Flight from Great Britain to Australia (1919–1969) : 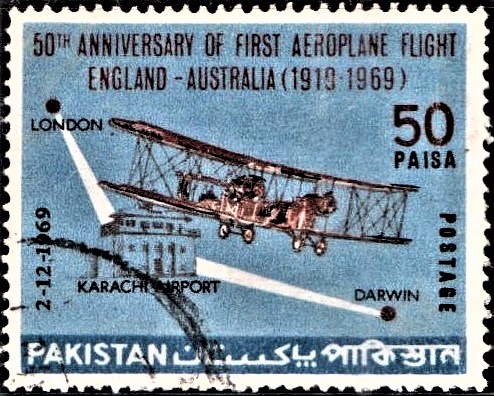 Issued for : In March 1919 the Australian Government offered a prize of £ 10,000 for the first aeroplane to fly from England to Australia. The Air Race was won by the Vickers Vimy biplane commanded by Sir Ross Smith who took off from England on November 12, 1919 and reached Australia on December 10, 1919 after making brief stop-overs at various places including Karachi. The 50th Anniversary of this epic journey is being celebrated this year by a special re-enactment flight which will follow as closely as possible the route flown by Sir Ross Smith in 1919. To commemorate the occasion, Pakistan Post Office is issuing a postage stamp of 50-Paisa denomination on December 2, 1969, the date on which the re-enactment flight from London is scheduled to land at Karachi en-route to Australia.

Design : The format of the stamp is rectangular and horizontal. The “Vickers Vimy” which was the first aeroplane to reach Australia from England via Karachi in 1919 forms the central part of the design. The Karachi Airport building as it existed at that time has been shown in the back panel. The colour of the aeroplane is brown and black and the airport building has been shown in light brown against a pale blue background. The caption on the top of the stamp reads “50th Anniversary of First Aeroplane Flight England-Australia (1919-1969)” which is in red colour. The value “50” on the right side of the stamp as well as the dots pin-pointing London to Darwin is indicated in reverse. The words “Paisa” and “Postage” on the right side of the stamp, the date of issue of the commemorative “2-12-1969” and the words “London”, “Karachi Airport” and “Darwin” are in black.

A dark blue panel at the bottom bears the word “Pakistan” in English, Urdu and Bengali in reverse.