A commemorative postage stamp on the Dacca–Tokyo Pearl Route Inaugural of the Pakistan International Airlines (P.I.A.) : 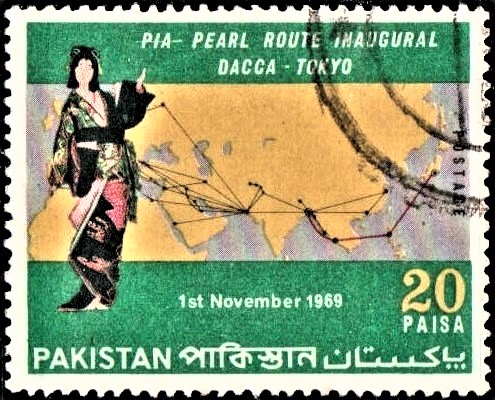 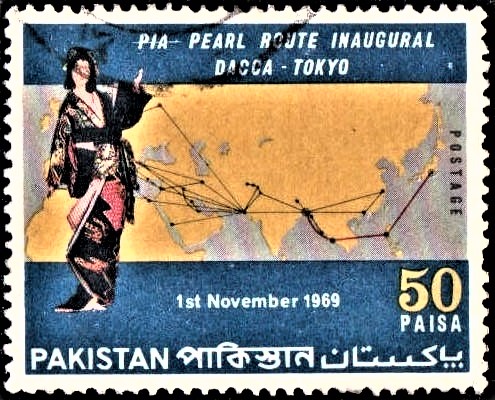 Issued for : With the inauguration of its service to Tokyo from November 1, 1969, P.I.A. completes a full half circle around the globe. The opening of the Tokyo service over the appropriately named “PEARL ROUTE” marks the fulfilment of a long cherished desire of the airline. Pakistan Post Office is issuing a set of two commemorative postage stamps of 20 Paisa and 50 Paisa denominations on November 1, 1969 to commemorate the occasion.

Design : The format of the stamp is rectangular and horizontal. The stamp is divided into three panels. A Japanese doll is placed in the extreme left side of the stamp against the three panels and points at the caption. The top and lower panel are green in the 20 Paisa stamp and blue in the 50 Paisa stamp. The top panel bears the caption “PIA PEARL ROUTE INAUGURAL DACCA–TOKYO” in reverse. The lower panel bears the value 20 and 50 in yellow colour in the lower right corner. The word “PAISA” and “PAKISTAN” in English, Bengali and Urdu and the date “1ST NOVEMBER 1969” appear in reverse against a green and blue background in the 20 Paisa and 50 Paisa stamp respectively. The central panel consists of a map of the world. The land mass is shown in yellow colour and the sea in grey. Black lines in the map mark the route followed by PIA to different parts of the world. The red line indicates the new Pearl Route Dacca–Tokyo. The word “POSTAGE” is in black against the grey colour of the sea on the right side of the stamp.