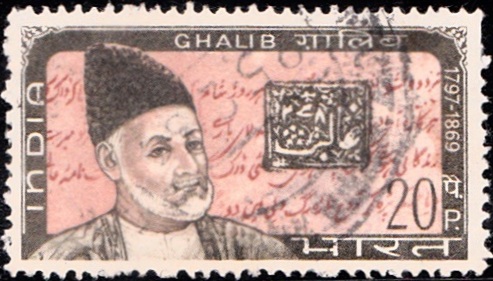 Issued for : This great son of Delhi and of India breathed his last a hundred years ago. His contributions to Urdu literature are unique and unsurpassed. He was largely responsible for the evolution of Urdu, essentially a language of the masses, into an effective medium suitable for modern prose and poetry. India is observing in a fitting manner the centenary of his passing. The Indian P & T Department is proud to pay its homage to this distinguished poet and man of letters by issuing a commemorative postage stamp in his honour.

Description of Design : The design of the Stamp is horizontal and depicts a portrait of Ghalib on the left side of the stamp. In the background script of his letter is shown and a seal appears at the right in middle portion of stamp.