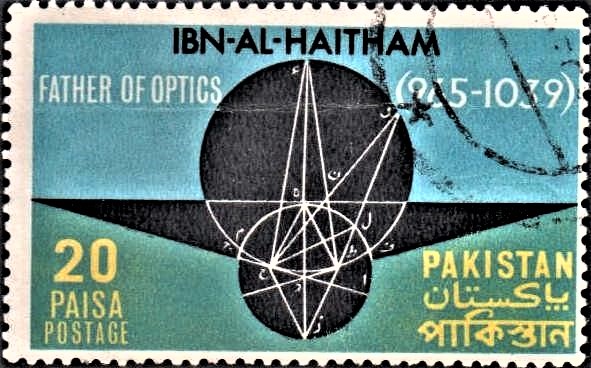 Issued for : To salute the memory of Abu Ali Al Hasan ibnul Hasan ibn al-Haitham (Alhazen) and the monumental achievements bequeathed by him to mankind, the Pakistan Post Office is issuing a commemorative postage stamp of 20 Paisa denomination on 4th November, 1969 on the occasion of the celebration of the 1000th Anniversary under the auspices of Hamdard National Foundation.

Design : The stamp is rectangular and horizontal in format. It is divided into two portions by the diagram indicating reflection of light drawn by Ibn-al-Haitham, the father of optics. This diagram joins the main part of the design and is in black colour with markings in reverse. The words “IBN–AL–HAITHAM” appear in black above the diagram, against the blue upper portion of the stamp. The words “FATHER OF OPTICS” and the period “(965-1039)” appear in reverse on either side of the diagram. The lower portion of the stamp is green with the denomination figure, the words “PAISA”, “POSTAGE” and “PAKISTAN” (in English, Urdu and Bengali) in yellow on either side of the diagram.

Colour : Blue, black, yellow and one extra colour in green in the lower panel has been formed by combination of blue and yellow operations.