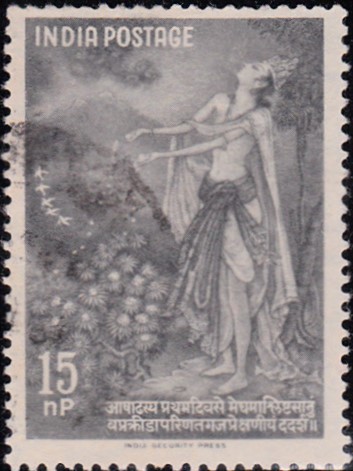 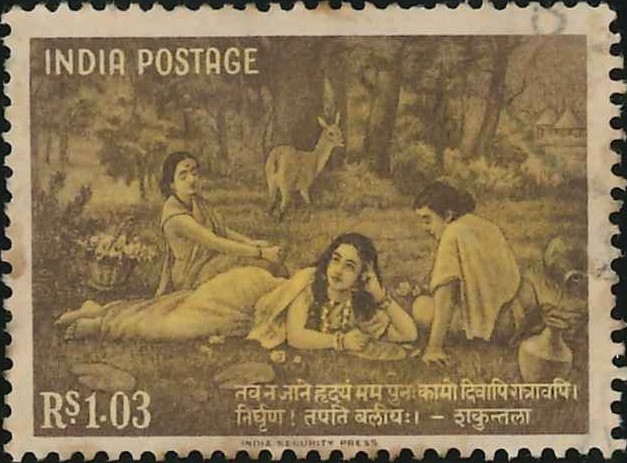 Issued for : It is for all these reasons that Kālidāsa‘s influence over his contemporaries and his successors has been profound. In fact, such has been his hold on the Sanskrit literary world that once, when the poets were being counted, Kālidāsa, being the first, occupied the last finger, but none could come upto even the second place and the ring finger has consequently remained nameless, anāmikā as it is referred to in Sanskrit. On Indian poetry in particular and on Indian art in general, the stamp of his genius and inspiration has been enduring. The excellence and the quality of his works have created a widening circle of admirers abroad, and if the Posts and Telegraphs Department, departing from normal tradition and policy, has decided to commemorate this illustrious poet-dramatist with the issue of two stamps unrelated to any conventional anniversary but related to a date in one of his own works, it is as a humble tribute to the great and honoured place which Kālidāsa occupies among the world’s most illustrious authors and which his works have achieved in the libraries and literatures of the world.

Design : The two stamps illustrating scenes from his great works viz., the Meghadūta and the Śākuntala are being issued on the first day of Āsādha (June 22, 1960), the day on which the Yaksa of the Meghadūta, while sojourning in Rāmagiri, appealed to the Cloud to carry his message to his beloved in Alakā on Mount Kailash.

The picturization is based, in the first case, on a painting by Professor Radha Charan Bagchi of Kala Bhavan, Santiniketan, and, in the second, on a painting by the late Raja Ravi Varma celebrated in this country for his portrayals of figures and scenes from classical and mythological life and lore. Incidentally, this was the very first painting done by the Raja on Indian mythology in 1878. The designs of the two stamps have been executed by the staff artists of the India Security Press – P. B. Chitnis and K. M. Dhar.

The scene from the Śākuntala depicts the incident of her writing a love-letter to her beloved Duś yanta in the midst of the sylvan beauty of the hermitage of her adopted father, the sage Kanva. The scene from the Meghadūta represents the Yaksa, pleading with the Cloud to convey his message of love and pathos to his beloved in far-off Alakā.

The stamps bear as theme the following verses out of the two works that they seek to represent :–

Select extracts of Kālidāsa‘s works are also appended in this brochure to bring out the various qualities and characteristics of his works and art. They are by no means a substitute for a study of the original but are intended only to provide a small window to the wide vista of his works and art. – (V. Shankar, Director-General, Posts and Telegraphs)

The cover of this brochure bears an imprint of the beautiful terracotta medallion found at Bhita Excavations in the year 1872. Measuring 3″ in diameter, it carries a scene from Kālidāsa‘s Śākuntala, in which King Duś yanta with his charioteer is being entreated not to kill the antelope which has he fled for refuge to Kanva‘s hermitage. The verse corresponding to this scene is reproduced on the cover page and an English translation appears below.

Why should his tender form expire,
As blossoms perish in the fire ?
How could that gentle life endure
The deadly arrow, sharp and sure ?
– Abhijnāna-Śākuntala I. 10.
(Translation by Arthur W. Ryder).