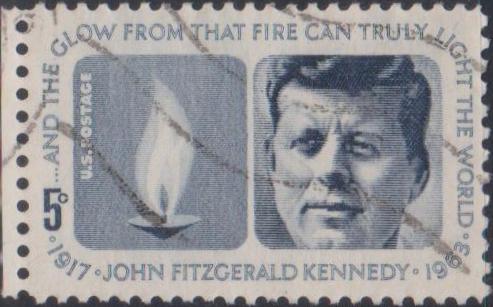 Issued for : The 5-cent John F. Kennedy memorial stamp will go on nationwide sale on May 29, 1964, the 47th birthday anniversary of the late President. However, first day of issue cancellations may be obtained only through the Boston, Massachusetts, post office.

Design : The quotation “…. and the glow from that fire can truly light the world“ was taken from President Kennedy‘s inaugural address. The idea for the eternal flame came to the artist as he watched the lighting ceremonies at Arlington National Cemetery on television. From memory he sketched the flame. The portrait is based on a photograph which the designers felt conveyed personal warmth and vitality and was selected from hundreds of photographs examined.

Designed by : This stamp was designed by the New York firm of Raymond Loewy/William Snaith, Inc., based on a sketch by Bureau of Engraving and Printing artist Robert L. Miller. Mrs. Jacqueline Kennedy made the final selection from the many designs submitted to her.

Technical Details : This horizontal stamp, measuring 0.84 by 1.44 inches, was printed on the Cottrell presses in blue and issued in panes of 50. The initial printing was 250 million, twice the usual quantity.

Born on May 29, 1917 at Brookline, Massachusetts, United States