A commemorative postage stamp on the 50 Years of the Republic of India : 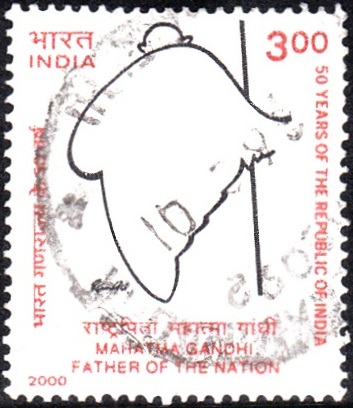 Issued for : The Department of Posts commemorates the Golden Jubilee of the Republic of India with issue of a special/commemorative stamp paying tribute to Father of the Nation, Mahatma Gandhi. The stamp has been designed by eminent artist Shri Ranga, who was worked extensively on the theme of the life of Gandhiji, and portrayed very evocatively, various aspects of the life of the Mahatma and Gandhian thought. Since India attained Independence a large number of countries across the world, have honoured Mahatma Gandhi, through issue of commemorative postage stamps. The Department of Posts has over the years issued commemorative postage stamps, in honour of different aspects of Gandhian thought, and his leadership of the National Movement for Independence. A grateful and proud nation, on the 50th anniversary of the Republic of India, pays homage to the man, since his death universally acclaimed as the Father of the Nation through issue of this special commemorative stamp.