Complete Set of 2 nos of postage stamps on the Modern Arts in Japan : 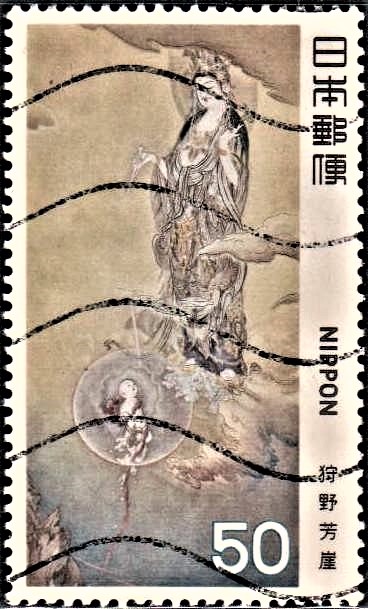 Issued for : As the first in the Modern Japanese Art Series of Postage Stamps, two 50 yen postage stamps have been issued on May 30, 1979.

(A) A STATUE OF THE MERCIFUL MOTHER KANNON (AVALOKITESVARA) (Designated as an important cultural property, preserved by the Tokyo Arts University)

Hogai Kano (1828-1888) was born in Chofu in the Province of Nagato (present day Yamaguchi Prefecture). He came to Edo at the age of 19, and studied under Shosen–in Masanobu Kano at Kobiki Town. Later, he went back to his home town for a while, but returned to Edo again in 1879 to devote himself to painting. The Western style painting was popular in those days, and a renaissance movement to restore the traditional art was just beginning in the circle of Japanese painting circles. During the last four years, until he died at the age of 60, Hogai, on whom Fenollosa placed his hope, put his whole heart and soul into his works.

(B) NEPTUNE’S SCALE PALACE (Designated as an important cultural property, preserved by the Bridgestone Art Gallery)

Shigeru Aoki (1882-1911) hailed from Kurume. He came to Tokyo at the age of 16, and joined the Fudosha, a painting school, run by Shotaro Koyama. He entered the Tokyo Arts College in 1901, and studying under Kiyoteru Kuroda, was influenced by the French Impressionist School. He was active as a painter only for a little more than 10 years and a little more.