A commemorative postage stamp on the 4th Anniversary of Statehood of Nagaland : 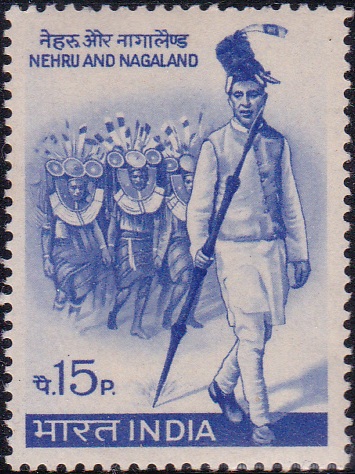 Issued for : On the 1st December, 1967 falls the fourth anniversary of the inauguration of the State of Nagaland. On this occasion, the Posts and Telegraphs Department feels greatly privileged to issue a special postage stamp. The theme selected for this special issue is befittingly, “Nehru and Nagaland“. The story of India has been a synthesis of races and cultures leading to the creation and characterisation of a composite Indian civilisation, diverse in its origin but united in its ideals and aspirations. The theme highlights the need for emotional integration of India – the principle which was dearest to the heart of Pt. Jawaharlal Nehru.

Design : Design based on Photo by Shri R. D. Chopra, Assistant Director, Photo Division, Ministry of I. & B., Govt. of India.