A commemorative postage stamp on the Inauguration of the Mangla Dam : 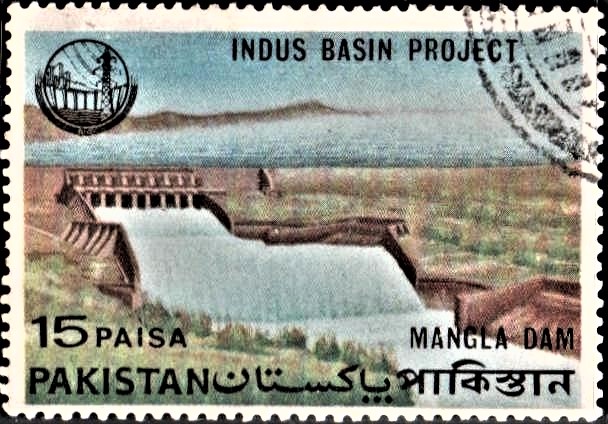 Issued for : Pakistan Post Office is issuing a Postage Stamp of 15 Paisa denomination on November 23, 1967 to commemorate the inauguration of Mangla Dam which forms a major part of the Indus Basin Project. The Indus Basin Project is an integrated system of water control works, known as the Replacement Works, based on the Indus Waters Treaty 1960, between Pakistan and India, which resolved the Indus Water Dispute.

Design : The design shows the spill-way with water gushing through the sluice gates. In the background is the vast lake merging into the horizon. The insignia of WAPDA and the words “INDUS BASIN PROJECT” appear at the head of the stamp printed in black. The denomination “15 Paisa” and the words “MANGLA DAM” appear at the foot of the stamp immediately above the word “PAKISTAN” printed in English, Urdu and Bengali.