A commemorative postage stamp on the Opening of the New Railroad Station at Kamalapur : 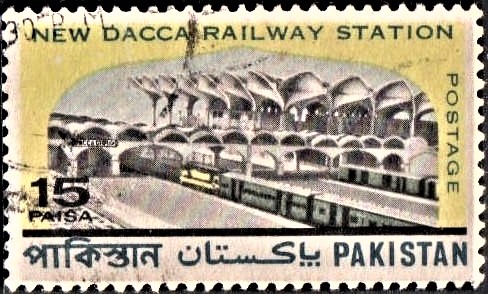 Design : A panoramic view of the New Dacca Railway Station is shown through a wide arch similar to the arches of the platforms. The arch, which is yellow in colour is rested on a thick black horizontal line under which ‘Pakistan’ in Bengali, Urdu and English appears in blue colour. The station appears in tones of grey and black, with two trains standing. One train is in the foreground almost in the centre with its engine and two bogies visible. The other train appears in the background with its last bogie visible. The bogies are in green colour and the engine is in black with yellow strips. The denomination figure ‘15’ with ‘Paisa’ underneath appears at the left end of the horizontal line. The caption ‘New Dacca Railway Station’ appears in green at the top on the arch. The word ‘Postage’ in green colour appears at the right hand side of the stamp.