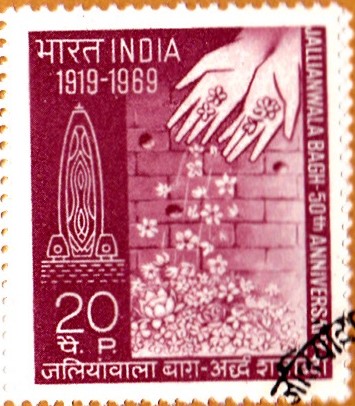 Issued for : It is on the foundations laid by the martyrs who fell on that fateful Sunday that the edifice of our liberty is built. A grateful nation is observing the 50th anniversary of this portentous event. The P & T Department considers it a privilege to commemorate the occasion by issuing a special postage stamp.

Description of Design : The design of the stamp is vertical and depicts a portion of a wall with bullet marks and showing two hands dropping flowers near the wall. The Jallianwala Bagh Memorial is shown at the left.