A set of three commemorative postage stamps on the ‘Salute to Our Armed Forces’ by Pakistan : 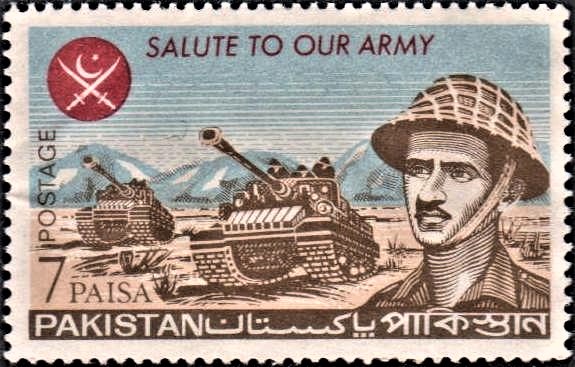 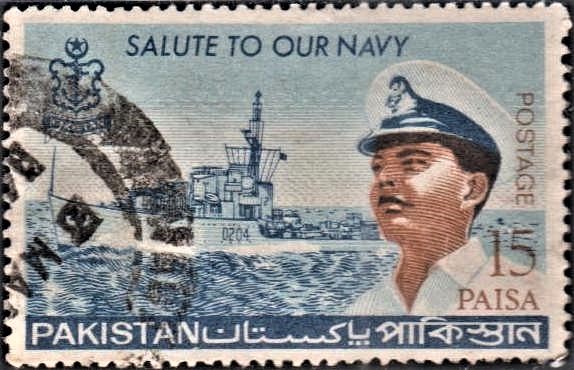 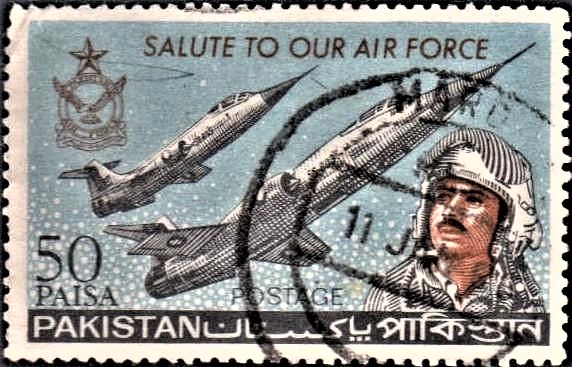 Issued for : To salute our valiant Armed Forces for their heroic defence of Pakistan during the 17-day Indian aggression in September 1965, the Pakistan Post Office is issuing a set of three stamps of 7-Paisa (Army), 15-Paisa (Navy), and 50-Paisa (Air Force) denominations on the 25th of December, 1965.

(i) 7-Paisa (Army) : The scene of two advancing tanks is shown prominently in the design placed in the centre with hills in the background. A portrait of a Pakistani soldier is shown as a symbol of courage and determination. The Army crest appears in red on the top right hand corner. The Slogan “SALUTE TO OUR ARMY” is shown at the top in red. ‘Postage’ and ‘7 Paisa’ appear in the bottom left corner. The word ‘Pakistan’ in English, Urdu and Bengali appears in white in the Khaki strip at the bottom.

(ii) 15-Paisa (Navy) : A Pakistan navy Ship is shown sailing on high seas. On the right corner appears the portrait of a naval officer as a symbol of alertness and courage. The slogan “SALUTE TO OUR NAVY” runs across the middle sky at the top in blue and the crest at the left corner in the same colour. The word ‘Pakistan’ in English, Urdu and Bengali appears in white in the blue strip at the bottom. The words ‘15 Paisa’ and ‘Postage’ are also shown in the design.

(iii) 50-Paisa (Air Force) : Two Star Jet Fighters F-104 are shown soaring up in the sky with the portrait of a pilot in the right corner. Air Force crest appears in brown colour in the top left corner while the slogan “SALUTE TO OUR AIR FORCE” appears at the top in the same colour. The word ‘Pakistan’ in English, Urdu and Bengali appears in white in the dark grey strip at the bottom. The denomination ‘50 Paisa’ appears in the bottom left corner and ‘Postage’ in the middle just above the strip.