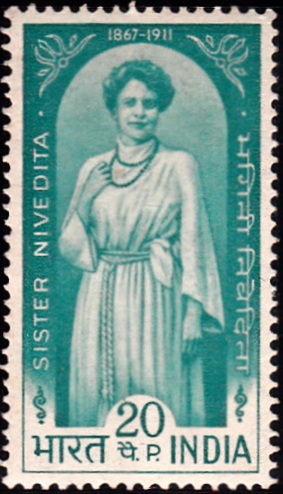 Issued for : A grateful nation is celebrating Sister Nivedita‘s Centenary year; and the P. & T. Department counts it a privilege to mark the occasion by bringing out a commemorative stamp in her honour.

Description of Design : The design of the stamp is vertical and depicts a portrait of Sister Nivedita. The year of birth and death, viz., 1867-1911 appear on the top. The name in English and Hindi ‘SISTER NIVEDITA‘ appear along the left and right border of the stamp. Denomination and INDIA appear at the bottom of the Stamp design.