A commemorative postage stamp on the Centenary of the Discovery of gold in California : 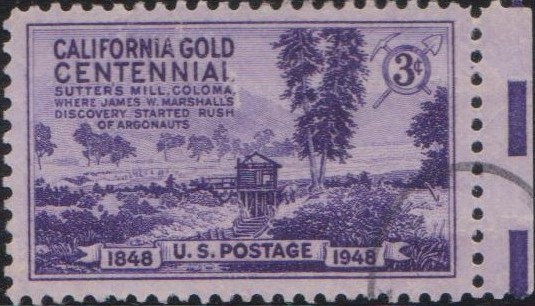 The Historic Stamp :
The 3¢ stamp commemorates the 100th anniversary of the discovery of gold at Sutter’s Mill in California. A carpenter, James W. Marshall found the first gleaming nuggets. News of his discovery spread quickly, prompting thousands of prospectors to head West to seek their fortunes. Between 1848 and 1850, California’s population increased nearly 400%.

C. R. Chickering designed the stamp showing John Sutter’s sawmill as it appeared in 1848. In the foreground is the Sacramento River and in background, dimly visible, are the Sierra Nevada Mountains.

The California Gold Centennial Stamp was printed in dark violet by steel engraving. The First Day City was Coloma, California, near the site of the original sawmill.