A commemorative postage stamp on the 2500th Anniversary of the Cyrus Charter of Human Rights : 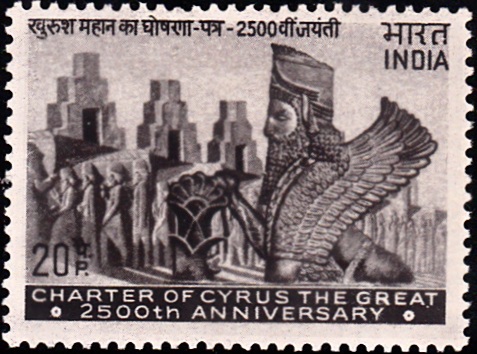 Issued for : The Indian Posts & Telegraphs Department feel privileged in bringing out a stamp to commemorate the 2500th Anniversary of the Charter of Cyrus the Great and join in the homage being paid by the nations of the world to the memory of the Great King who was one of the earliest exponents of the principles of Human Rights. The stamp depicts the figure of a winged animal with a human face (which is now preserved in the Museum at Tehran) found in the Central Palace at Persepolis, the imperial capital of ancient Persia. The background shows the stairway of the Central Palace with groups of Persian & Median nobles in conversation.

Description of Design : The design of the stamp is horizontal and shows a winged animal with a human face in Persepolis with the stairway of the Central Palace at Persepolis in the background.